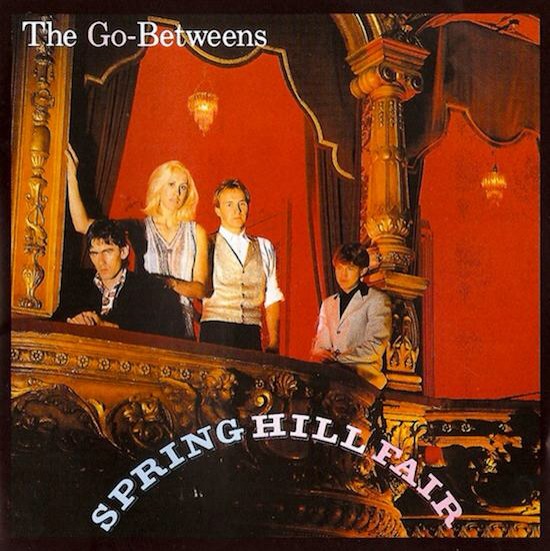 Gig-going regrets? We all have them- some can still be rectified, others can’t and some, owing to accidents of birth and geography, are too futile to dwell on but my realistic reasons for ruefulness include: never seeing Jeff Buckley or Stereolab; not seeing REM until 1989; being compelled to pass on an Al Green gig owing to farcical ticket prices and deciding to go and see the Cramps a second time.
But my most lingering pang arises from a calamity with the Go-Betweens in 1997. Having fallen hard for them after seing them a decade earlier and mourned their demise three years after that, their resumption was like discovering that a treasured item feared binned had actually been sitting in the cupboard all along. The cupboard on this particular Friday night was Glasgow’s Garage; at this time, I was working some 60 miles from the city and, as a rule, stayed away during the week then returned at weekends.

That evening, I got away from the office later than I’d hoped and arrived, flustered and frustrated, to hear them playing Draining The Pool For You, followed by Bachelor Kisses. Their set ended about 20 minutes later and the intakes of breath which followed my revelation of the first songs I heard told me just how much I’d missed.

The fact that this still rankles to the extent it does 18 years on speaks partly of a petty inability just to let go – but also of how much the Go-Betweens have come to mean to me. And those two songs can be found nestling on Spring Hill Fair, as fine an introduction to them as any of their albums.

Practically everything that’s been written about the Go-Betweens over the past quarter-century – including, I confess, a piece written by me as a callow student in 1990 – has laid great emphasis on the chasm between their critical acclaim and the quality of their music on one hand and their commercial success on the other. I see little value in going over this well-worn ground once again – what counts is that their music exists and is easily tracked down. Those who have yet to hear them are to be envied.

Spring Hill Fair, their third album, captures them in transition. Often, this can mean a patchy record with inconsistent focus – think of Another Side Of Bob Dylan, where there’s a Ballad in Plain D for every Chimes Of Freedom – but here, the subtle shift from the coiled-spring dramas they had so far specialised in to more elegantly crafted portraits is rounded and complete, meaning that the shift is no clunking handbrake turn but is seamless, almost imperceptible, bound together by the unifying theme of the turmoil of adult, but still often quite irrational, romantic intrigue.

Bachelor Kisses (introduced that fateful night at the Garage as “a song from France 1984” despite being the only Spring Hill Fair song not recorded there) opens proceedings and it’s a challenge to put into words how exquisitely beautiful it is. Clouded in a mist of synths so all-enveloping that they haven’t dated a second, it no more strays into sentimentality or smarm than William Blake strayed into limericks, tethered as it is by a rough-edged guitar solo which only casts the song’s sweetness into greater relief – as do the harmonies of the Raincoats’ Ana Da Silva (credited as Anna Silva) . Grant McLennan gives a warning to stay away from the cads and sugar daddies but does so without being patronising – it’s not a message to be given lightly (“Hands, hands like hooks/You’ll get hurt if you play with crooks”) and it can yield rewards (“Faithful’s not a bad word.”)

Five Words captures the Go-Betweens in-between, the looping melody straining and almost snapping but finally pulling itself straight against Lindy Morrison’s marching-yet-still-dragging its-heels beat. The words turn out to be “Bury them don’t keep ’em” – memories? Secrets? We never learn – another enigma from some of the finest purveyors of them. The ’80s produced few songs as restless yet simultaneously sure-footed as You’ve Never Lived, where a laser of a chorus cohabits with guitars that seethe like troublesome insects as Robert Forster delivers some of the finest of his many lines of suavely savage self-deprecation (“I’m no genius, just a former genius, a shadow of the genius/That I am.”) It’s the concoction that Franz Ferdinand have been grasping after for the past decade but have never quite clutched.

He’s at it again on the imperious Part Company, where there’s a brief mock-epic flourish (“From the first letter I got to this, her Bill of Rights”) and Forster’s brilliantly offhanded truncation of the middle syllable in “company,” as if to undercut the elegance that surrounds him, from the solemnly enunicated guitar figure to the ghostly apparel of that most ’80s of accessories, the Prophet synth, which is saved from being trapped in dayglo amber by its near-perfect mimicry of a theremin.

The McLennan monologue River Of Money has been compared more than once to the Velvet Underground’s The Gift but the similarity is more musical than lyrical, with a shared muscular, squealing feel to the backdrops. Where The Gift is a fully-realised short story, with plot, action, shifts of scene and grim twist, River Of Money is more meditative; it observes a general state of mind (“It is neither fair nor reasonable to expect sadness to confine itself to its causes”) and applies it to a particular case of him having to accept she’s gone and won’t be back. He fails, her memory blotted out neither by travel (“Snow which he had never seen before, was only frozen water”), drink (“Bottles had almost emptied themselves without effect”) or even simple domestic pleasures (“The television, a samaritan during other tribulations, had been repossessed). In this, it has more in common with Lou Reed’s solo Last Great American Whale – which appeared four and a half years later. An influence? We’ll probably never know but it’s an intriguing thought.

Forster’s now notorious theory, expounded in his book The 10 Rules of Rock and Roll, that an album’s penultimate song is always its weakest is comprehensively disproved on Spring Hill Fair. McLennan’s Unkind and Unwise is almost the archetypal Go-Betweens song, with a locomotive thrust and a semi-autobiographical lyric speckled with natural imagery (“Burn in a river tangled with reeds/While a crane on the water silently feeds”) and sneaking in at just under three minutes, it dabbles in perfection and decides to hang on to it. There’s some fun had on the lyric sheet of Spring Hill Fair, with droll asides dotted across the songs, and the fade of Unkind and Unwise is heralded with “(repeat till cicadas join in the fun).” Blow me if I didn’t have to reach for the dictionary and discover that the song would be fading long into the night with cricket-like creatures.

In his excellent biography of the Go-Betweens, David Nichols asserts that Spring Hill Fair “doesn’t quite seem to come up to scratch” and suggests it may be too diverse to be cohesive. To me, though, most of their albums are fully-formed, with the right balance of meticulousness and all-too-human humanity to ensure the right songs are chosen and put in the right place; it’s hard to imagine Spring Hill Fair in any other order or form. They also hold Forster and McLennan up as one of the great songwriting partnerships; in true Lennon-McCartney fashion, the co-credit often belies the dominant presence of one half (though Five Words has at least lyrical input from both) but the presence of the other half is always tangible.

It was their only album on Sire – a brief sojourn between Rough Trade and Beggar’s Banquet. Two months later, Sire issued Madonna’s Like A Virgin and there was no competing with that – but there I go into the forbidden territory. I’ll limit myself to observing some of the belated recognition that has come the Go-Betweens’ way, at least in Australia – the Go-Between Bridge in Brisbane, Cate Blanchett declaring herself a fan and Streets of Your Town (from 1988’s 16 Lovers’ Lane) finding its way on to an iPod’s worth of Australian music (which also featured 13 songs by pedestrian rocker Jimmie Barnes) given to Barack Obama in 2011 by Australia’s then Prime Minister Julia Gillard – and to regretting deeply that much of this came too late for McLennan, who died in 2006 at the shockingly premature age of 48.

I bought Spring Hill Fair in Bordeaux for 10 francs – roughly equivalent to £1 or, at the present rate of exchange, €1.42. A week earlier, I bought Robert Wyatt’s Rock Bottom (qv) in the same city for the same price. My spokesman, Pete Townshend, has prepared the following statement: “I call that a bargain – the best I ever had.” (PG).