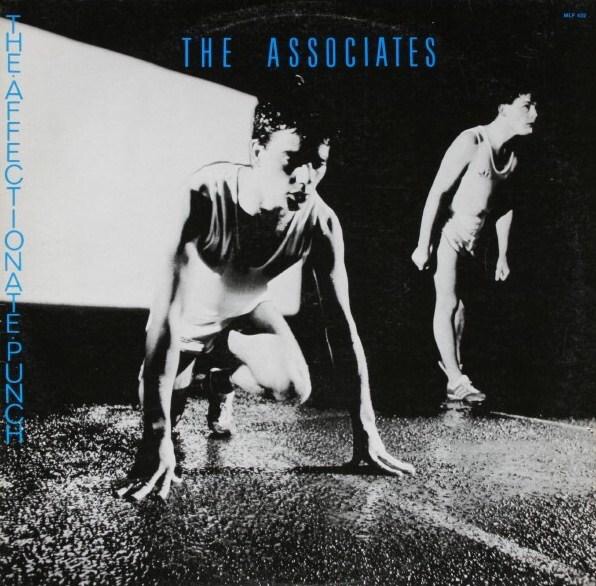 THE AFFECTIONATE PUNCH – ASSOCIATES (1980)
A quote which encapsulates the magic of Associates appeared in the music press in the early ’80s but is now, regrettably, like so much else, being misquoted online. “Associates are originals. This is currently rare” is what you’ll read now; however, this is a shockingly tame dilution of the original excerpt from a review of their 1982 album Sulk, as reproduced in the Virgin Rock Yearbook 1983. This had the far more evocative, illuminating and, well, Associated phrase “crushingly rare.”
It’s an assessment their heartbreakingly late singer, Billy MacKenzie, might have offered himself. A voice of rare agility and velocity – neither ostentatious, strident operatics nor obseqiuous croon but capable of describing mile-wide arcs while reclining langorously – and a lyricist who, even in an era when language was being smuggled into all kinds of uncharted territories, stood out in his rich obliqueness.
Such a singular voice and pen required an equally singular kapellmeister. Step forward Alan Rankine, an instrumentalist for whom the pedestrian credit “guitar, keyboards” would have seemed not only insufficient but also vulgar and impertinent. Try simply “instruments” or even “textures and landscapes” and we might be getting somewhere.
Associates announced themselves in 1979 with uncharacteristic understatement, with a cover of David Bowie’s still-new Boys Keep Swinging. This might seem like a very 21st-century introduction but had next to nothing in common with the smothers that clutter YouTube, SoundCloud and Bandcamp – rather than a straight photocopy or an ‘unexpected’ rearrangement, they tweaked the melody just enough for it to become property of MacKenzie and Rankine, all with the untutored production that seals the greatness of so much music from this era.
As Rankine has described to TNPC (see interview below), they carried this approach into the recording of The Affectionate Punch. By this time, they were bolstered on bass by Michael Dempsey, who may have missed out on many of the Cure’s riches through his departure a year into their recording career but still had the time to figure in a sizeable slice of their best music. In his new – albeit again short-lived – space, he was part of an unforeseen crackerjack which pushed an already already collapsing under the weight of invention into even more dragon countries.
Where to start? The Affectionate Punch itself opens with what the uncharitable may term Chopsticks piano but which I would place in the lineage of All Tomorrow’s Parties and which soon locks into a groove which makes its point calmly but firmly, like an orator who is capable of commanding a room with a single look. MacKenzie is that orator as he reflects on a curious ritual often found in Scottish males (though neither exclusively Scottish nor exclusively male) of using insults and aggression in endearment – a practice which still “draws blood, more blood.” No stereotypical Scottish males were involved in the making of this song.
Amused As Always flies by the seat of Dempsey’s jabbering see-saw of a bassline, while Rankine unleashes a guitar solo of a kind which shows that they needn’t have been anathema under punk if they’d all had this Michael Karoli-styled  taciturn economy.
It’s next that the album really gathers momentum. Logan Time is solemn, aloof and quite, quite beautiful, barefacedly honest (“I talk such nonsense while asleep…now the cough, nervous cough/Twitches on, twitches off) and is even given an air of formality by a brief marching tattoo on the bridge and an enveloping bagpipe drone provided, appropriately enough, by a properly attired major. It’s only on the remastered and partially re-recorded version of the album, which appeared in 1982, that it’s properly identifiable as Scotland’s national cacophony, and then only in a mirth-makingly brief squirt which polishes it off where the original faded. Nevertheless, it stands alongside Tom Waits’ Town With No Cheer and, well, Blue Aeroplanes’ Bagpipe Music as the finest us of the pipes in rockpopcallitwhatyouwill. It’s said to have been inspired by Logan’s Run, the novel and film depicting a future in which no one is allowed to live beyond 30 and humanity lives sealed under domes but part of me wonders if it refers to Logan, Utah, some 20 miles from the hometown of Chloe Dummar, to whom MacKenzie was briefly married in the mid-70s. In its unhurried pulse and circumspect demeanour, it even to some degree foreshadows Associates’ fellow Scottish explorers, the Blue Nile.
Paperhouse rides on a keyboard figure which is straightforward and mellifluous but which conceals a scurrilous chord change that never fails to catch me off guard. It’s not a cover of the Can song (for all the valiant efforts of the Jesus and Mary Chain, Loop and Thin White Rope among others, Can rightly consider covering their songs to be a futile venture) but it shares with its namesake a restlessness, communicated in Rankine’s Keith Levene-does–the-pibroch guitar figure underpinning the verses and in MacKenzie’s suitor-cum-estate agent boldly offering the titular house as a gift, the clincher “there’s a garden at the bottom” hastily offset by a “na-na-na-na-na” which sounds like he’s stonewalling when the flaw in the plan is identified.

Finally, one more thing which epitomises Associates, though it didn’t directly involve them. In 1981, somewhere roughly between the releases of Q Quarters and Kitchen Person, Grace Kelly visited Dundee with Prince Rainier to see their team, AS Monaco, play Dundee United in the UEFA Cup. United,  under the leadership of Jim McLean, one of Scottish football’s finest martinets, had already convincingly won the first leg 5-2 in the principality; Monaco salvaged something with a 2-1 second leg win but, even in the presence of such regal, serene, exquisite, Hitchcockian company, the city of Dundee  had the last word. Somewhere in there, you’ll find, again, the magic of Associates and their cavalier, buccaneering, panache-soaked originality, which is currently as rare as ever. Crushingly. (PG)

Alan Rankine on ‘The Affectionate Punch’

Associates were arguably the first band to emerge from Linlithgow/Dundee! To what extent, if any, did your hometowns shape your music?

Back in those days, in the early to mid seventies, I think UK wide… you were a glam rocker, an art rocker, a prog rocker, a metal head, an Rn B head, a jazz fusioneer, a funkster or a disco nut. OR a melange of any or all of the above! So , lyrically, no pixies n’ fairies for us! No Cock Rawk! Musically,… no power chords and no wanking your plank just because you were able to…

Nevertheless, these sub cultures went on whether in a city or in the provinces. Dundee was much more akin to Glasgow in that sense.

People liked their funk  (AWB etc) whereas in Linlithgow, being nearer to Edinburgh, had a fair amount of elves etc…. bring me the sick bag! So Bill n I took what appealed to us at the time.

On a similar theme, were the bagpipes on ‘Logan Time’ any kind of statement on your Scottishness or were they there purely for their sound?

Throughout quite a few Associates songs, there is an ostinato…sometimes quite subtle… sometimes more pronounced – in ‘Tell Me Easter’s On Friday’ it’s there with the yearning guitar playing C down to A or in ‘No’ the insistent pedalling on the low E note despite the chords going E minor B/E D/E A/E it’s there again in ‘Property Girl’ and I could go on…Anyway, both Bill and I could ‘feel‘ a drone was needed

So , not playing the chanter, let alone the pipes,  we contacted a session fixer for said bagpipe maestro to turn up at the allotted time. We should have known, when Pipe Major David Cochrane turned up at the studio, in full Highland dress, that things were not going to go quite as planned…ahem!
‘Logan Time’ is in the key of G Major, but these particular pipes could only be played in Eb or Bb hence we had to slow the track down or speed it up. In the end we just said ‘’blow’’ and gee it laldy. Nuff said!

I’ve always felt Transport To Central has, musically and lyrically, a very Cold War feel to it. This was a prevalent theme for many at the time but did it have any bearing on this song?

This was written in it’s entirety in 1978 on the piano in my parents front room in Linlithgow. When this song is played on piano, it is a completely different animal….all the nuances are much more apparent, and it seems to need orchestration and the whole shebang/kitchen sink.

Doing it with very stark guitar, no snare drum – this was provided by me kicking my amp with the reverb spring set up full… just seemed more apt as to what Bill n’ I were about,and where we were at. Lyrically, I think Bill had watched a TV programme about Peking man or Piltdown man

Both Bill and I were very proud of this song but knew,financially,   we could never have afforded the whole shebang … so this is what we came up with.

Billy MacKenzie was as gifted a lyricist as he was a singer (eg “we walk in straight lines like some naval fleet”) and the boldness and originality of his voice and lyrics matched that of your music. How different a band would Associates have been if he’d sung about love and rain?

I suppose what you’re really asking  is this: if we’d done the norm, both lyrically and musically, IT JUST ABSOLUTELY WOULD NOT HAVE BEEN US…..AT ALL!

Was the remastering/rerecording of ‘The Affectionate Punch’ entirely at the record company’s behest following the commercial success of ‘Sulk’ or were there things you yourselves wanted to change and/or enhance?

When we recorded and mixed and mastered ‘The Affectionate Punch’ in the spring of 1980, we were pretty innocent in the art of recording.

That said, it did give that album a certain charm through its innate innocence. But, by heck, we learned fast! Consequently, with ‘Fourth Drawer Down’ and ‘Sulk’ under our belts, we felt that we could revisit ‘T.A.P ‘and bring it more in line with our much wider audience. Certainly no interference from record companies.

Did we succeed in bringing anything else to the party? Personally, I think we should have left it alone. I’m not saying that we spoiled it, …some things were better, but others gained nothing from the rehash. We were simply trying to please our much bigger audience.