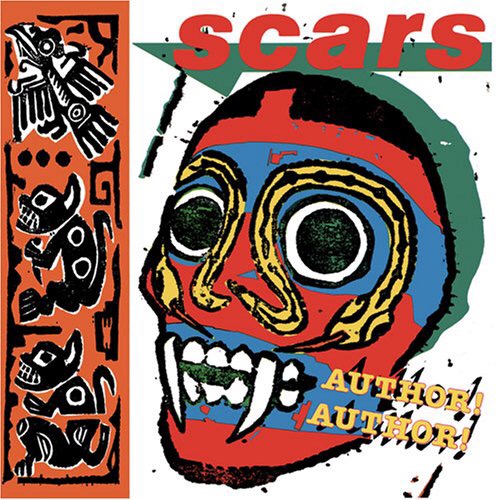 The bold cover that looks like an enemy in Tomb Raider 3. Albums would come into the house one at a time, monthly roughly, and be listened to relentlessly. We were in the country so no record shops that nearby: this album did the business. A funky punk sound, quite danceable, in a modern context still valid. Tribal and sticking to the beat. The tinny guitar licks are of the time but with a really full sound underneath. Listening to it now, I can hear something similar in the bands of today, the vocals and drums. Even moments of say Savages the band, are predicted here.

‘Leave me in the Autumn’, ‘Fear of the Dark’ – all cool chords. Dark and interesting on ‘Aquarama’ and always fat bass throughout. Sounded fab on our Sony music system. My brother and I had many a freaking out to music – bop on this one. All the time, that cover image suggesting some bizarre Papua New Guinea or Aztec mystery .

The Roland chorus effect was on everything at the time of this album, it’s definitely infecting all the guitar, but as skilfully blended as Public Image or Killing Joke. The Police for example, really over used the effect in my opinion.

Tempos really vary all the way through. They go fast and they go slow and atmospheric. They do nursery rhyme simple as much as complex arrangement and unexpected changes. It’s well arranged and produced. The vocals full of passion drawing you in to story climax. ‘Je t’aime C’est la Mort’ is a good example of this. The surprise talking voice of ‘Your Attention Please’ was a shocker on first listening. A warning message building and becoming neurosis-inducing shouting like a Robert Calvert science fiction moment in Hawkwind’s Space Ritual. Into the echo it goes. Great!

‘All About You’ is almost Brian Eno, almost Killing Joke, perhaps Roxy Music. Somebody should cover it. A great way to finish. On and up! Fab name, great album of its time, I loved it, still sounds good. 1980/1981. I bet your average music teen would think it was made recently.

I chose the album after thinking for some time through many that could have fit the bill. I do remember being amazed that ‘Author! Author!’ wasn’t a massive hit. To me and my brother, it was huge. So it’s back to that time period I thought I’d go. Cheers, Rolo. (Rolo McGinty)