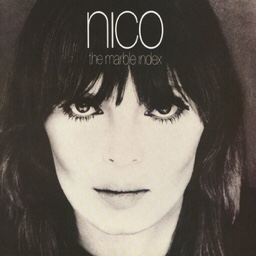 I’d forgotten all about The Marble Index, such a crushingly pessimistic listen, that each and every remnant of its shimmering beauty seemed to have been catheterised by some dark unbearable grief. But recently I found my way back to it alongside it’s shining sister Desertshore, through an obsession with the last few Left Outsides albums, whose forest-spirit avant-folk seemed to rekindle some latent inclination towards the vaguely morbid. Or perhaps that was simply the onset of winter.

Nico had already recorded her first solo album, an exquisite assemblage of chamber folk, Chelsea Girl – by the time she reunited with former VU companion John Cale. I know of at least two people who believe that album to be the greatest record ever made, period – and I must say I like it a lot myself – but Nico detested it, seething with frustration when she first heard its neutered production. Even so, few could have predicted what would emerge from the sessions at the recording studio on Cienega Boulevard in LA in September ‘68. After all, Christa Päffgen had a face made for superstardom – icy blonde, geometric cheekbones – but there had been signs on Chelsea Girl (in particular on ‘It Was A Pleasure Then’ where accompaniment was provided not by Jackson Browne, but by the Velvets’ core, so it came out howling and droning like a wrung out ‘Black Angels Death Song’) that she was striving to be taken seriously as an artist too.

To that end, she rejected her own beauty, dyed her hair dark red, wrapped herself in a shroud of death and like Scott Walker – a contemporary also at pains to prove he was more than simply a pretty face – reinvented herself as existential goth queen. I’ve always suspected an additional element of contrariness in this transformation which happened just as she moved from NYC to sunny California, but who knows? For certain the timing must have made the contrast in her appearance seem even sharper.

The album’s desperate bleakness resulted from a confluence of factors. Cale cultivated in its timbre a sound reflecting his interest in modern European classical music and Nico had been feeding off the mad ramblings of Jim Morrison who encouraged her to explore her inherently darker sensibilities, and gorge upon the opium-fuelled poetry of Coleridge. She had also acquired a harmonium and it’s droning wheeze perfectly captures the album’s dark spirit.

According to some accounts, Nico and Cale reputedly spent the whole time feuding whilst strung out on smack. All too much for in-house producer Frazier Mohawk, who could barely bring himself to put the finishing touches to the album, first of all consigning four of its bleakest compositions to the dustbin of history and then handing over the reins to Cale who became defacto producer. Cale claimed Nico’s harmonium was out of tune with everything but that didn’t matter, and in some ways it was entirely fitting. When after being left alone for two days, he played back his mix of the album to her, Nico reputedly wept with joy.

The album’s title is taken from a line in Wordsworth’s Prelude, which also lends its title to the short but incredibly beautiful opening instrumental. After that brief moment of transcendence darkness descends, beginning with ‘Lawns Of Dawns’ whose sonic refractions – like mirrors on the ocean, now glistening on the surface, now submerged beneath – parallel its author’s psychological disintegration. “Can you follow me?/Can you follow my distresses/My caresses, fiery guesses?/Swim and sink into/Early morning mercies”

There are dissonant chamber pieces (‘No-one Is There’) and ‘Ari’s Song’ (named after her son) which promises some relief but replete with droning pump organ entangled in some strange sonic barbed wire, was reckoned by Rolling Stone to be “the least comforting lullaby ever recorded”

On ‘Facing The Wind’, whose bizarre martial piano comes across like a discarded instrumental from Tom Waits’ Rain Dogs, Nico’s voice is electronically distorted giving it an even eerier more expressionistic quality: “It’s holding me against my will/And doesn’t leave me still/Amazons are riding out/To find a meaning for the name, my name.”

Cale’s fingerprints are everywhere in evidence but nowhere more so than on ‘Frozen Warnings’ whose bubbling ‘Baba O’Riley’ type pulse is underwritten by the insistent and unfluctuating drone of his viola.

And as far as apocalyptic finales go, the sinister spiralling ‘Evening Of Light’ takes some beating. “In the morning of my winter/When my eyes are still asleep/A dragonfly laying in a coat of snow/I’ll send to kiss your heart for me/Midnight winds are landing at the end of time/The children are jumping in the evening of light/A thousand sins are heavy in the evening of light.” It is ‘Tubular Bells’ turned inside out by Beelzebub, an agonising descent – as the last rays of light are slowly extinguished by the clattering noise and chaos of the welcome party for Hades.

The album clocks in at a mere half hour. Not everything about The Marble Index is black, but almost everything is. Its doomed unremitting litanies suggest catastrophe but it possesses an undeniable ‘slash your wrists’ nocturnal beauty and marks the moment Nico’s career as an artist truly began. (JJ)