When it comes to the Champions League Cup Final of pub debates – that of course being which are the greatest albums ever made – there inevitably arises the odd point of contention. For instance, there are those records which proffer such a sharp contrast in styles between their two sides so as to make consensus virtually impossible. These albums may be a major triumph (Low, Bringing It All Back Home, Neu ’75), a minor triumph (Rust Never Sleeps), or perhaps something less than a triumph (Abbey Road). Then there are those double albums (The Beatles, Tago Mago) and triple albums (Sandinista!, All Things Must Pass) which some will argue would have been better as a single volume, and others (Tales From Topographic Oceans, The Wall) which others reckon ought not to exist at all. Next there are those albums let down by at least one clunker (Surfs Up, Younger Than Yesterday, dare I be as bold to suggest Revolver?) But might it be a legitimate choice to include a record based on the merits of only one of its two sides? I certainly think so. Take for example Da Capo by Love, justly lauded in the original book The Perfect Collection. A magnificent first side certainly, but who ever really listens to ‘Revelation’? Then there’s the whole issue around the validity of including compilation albums. Often a hung jury is declared on that one.
Given the latter two considerations, it may appear like utter folly to make allowance for one whole side of what is ostensibly a Best Of compilation, for that album would for many, fail the test on both counts. And yet it would be equally foolish to exclude Before The Dream Faded by The Misunderstood on the basis of the otherwise quite reasonable gripe that it contains only six tracks worthy of note. For what if those six tracks authentically rank among the greatest psychedelic tracks ever recorded?

The Misunderstood were formed in Riverside California in 1963, one of the many thousands of garage bands to spring up across the States following the Brit Invasion. And like so many other bands of the time, their sound was a coalescence of bruising R&B, Bo Diddley shuffles and high-powered beat music. Nothing particularly new there, but by ’65 the embryonic fourpiece had gained a reputation as a fearsome live act. Not only that, but they also staked a claim to be one of the first bands to pioneer the live psychedelic light show. John Peel, then working as a DJ at KMEN in California, immediately recognised their potential, rating their performance at Pandora’s Box in Hollywood in early ’66 as one of the ten best live performances he ever witnessed in his life. At Peel’s behest the band were persuaded to move to London, in retrospect a somewhat strange move, considering the explosion of acid rock and psychedelia taking place back home in California. By then however, they had undergone some personnel changes – guitarists Greg Treadwell and George Phelps were replaced by Tony Hill and Glenn Ross Campbell respectively – leading to a vital and inspirational alteration of their sonic landscape. Now, with Campbell’s steel guitar at the centre, no-one else sounded remotely like them. The future looked promising, but after recording only seven tracks in London, vocalist Rick Brown was forced to return to The States to face the draft board. Eventually Fontana picked up the band, releasing two 45s before they disbanded. Peel famously quipped that: “By God, they were a great band! If they hadn’t been broken up by the US Government when they tried to draft Rick … they would have ruled the world.” Of that claim, one can only speculate. The four sides of those 45s along with two other tracks recorded at the time, make up the first side of Before The Dream Faded. And well, this is really about as good as it gets…

On ‘Children Of The Sun’ which initially appeared as one side of the second 45 from the sessions, Steve Whiting’s turbo charged bass struggles to wrap itself around Tony Hill’s scything feedback-drenched guitar. This is ‘Shapes Of Things’ on a seriously heavy dose of steroids and Whiting’s three-dimensional throb takes on a life of it’s own, predating John Cale’s jaw dropping outro on ‘White Light/ White Heat’ by over twelve months. Meanwhile, Rick Brown’s primitive howl seems at first to speed up then to slow down – is it poor mastering, or is it designed to mess with your head? – as he emphatically proclaims his acid-fried manifesto: “Let go lovely children/Close your eyes and drift away/When you wake again tomorrow/You’ll be born again to stay/Thus the word of love has spoken/You’ve joined the children of the sun.” 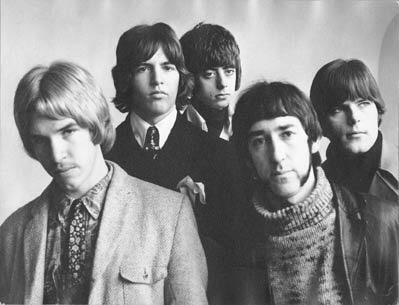 As explosive as ‘Children Of The Sun’ is, ‘My Mind’ is even more innovative, beginning with some Eastern raga-esque harmonics before Whiting’s pummelling sliding bass distortions take over. Brown is on top form now: “If there is anyone in my mind/Would they please take themselves away/Cause all time to stop/Cause all light to fade” …then a stuttering frenetic mess of thoughts and sound:..”There is no sense in this dimension/If I could leave there’d be no question/Of what I’d find/Peace of mind yeah…” and then…suddenly…the strangest intrusion you will ever hear in the middle of a madcap psychedelic wigout – Campbell’s steel guitar. Playing a different tune. On its own. It belongs as much here as a theremin solo would in the middle of ‘Pretty Vacant’ – at first that sense of utter incongruousness is unavoidable but slowly gives way to the realisation that this is insanely beautiful, utterly inspirational.

Next up and you expect they might have dug out their old workclothes to tackle Bo’s ‘Who Do You Love’. Not so. First of all the intro segues so seamlessly from the tail of ‘My Mind’ as to render the junction indistinguishable, before it’s zig zagging chords slowly begin to relent and Diddley’s standard is savagely ripped apart like a rag doll. And then Campbell repeats his feat, although this time, it seems less a bizarre musical interlude, than one of the most beautiful and haunting instrumental sections in all of popular music. If, on acid, Brian Wilson really did see God, then Campbell must have ingested a double dose of the same compound, for this brief but bewitching passage is genuinely paradisaical.

The macabre lyrical content of ‘I Unseen’ (“I’m only seven although I died/In Hiroshima long ago/I’m seven now as I was then/For I am dead, yes I am dead/My hair was scorched by swirling flame/My eyes grew dim, my eyes grew blind/Death came and turned my bones to dust/And that was scattered by the wind”) is adapted from a work by Turkish poet Nazim Hikmet (The Byrds’ did likewise on ‘I Come And Stand At Every Door’) and might possibly even outweigh its sonic potency, while the intensity and immediacy of its galloping rhythm illustrates the crucial advantage of a perfectly fluid album sequence. The first chords of this Yardbirds raveup turned inside out, are merely a bugle blast short of the charge of the Light Brigade, and provide the perfect counterpoint to the twisted elongated coda of ‘Who Do You Love’. Brown’s stonking harmonica solo is just the icing on the cake.

By the time ‘Find A Hidden Door’s demented staccato rhythms begin to melt your mind, Campbell’s steel guitar is now orchestrating proceedings like some all-seeing eye. By now the tempo is relentless, and one’s mind begins to crave momentary respite from the onslaught…

Cue ‘I Can Take You To The Sun’, the first 45 to appear on Fontana. In 1968, Peel famously called it “the best popular record that has ever been recorded”, and he wasn’t far off the mark. It plays with light and shade, power and fragility, as skilfully as The Velvets and Syd did at the same time. Building to a pulsating crescendo, suddenly the valves are loosened, and Hill demonstrates his versatility with a beautiful acoustic passage, the balalaika-style picking just unnerving enough to leave you suitably disoriented before the needle locks into the run out groove.

The second side here – a collection of recordings, most of which date from a year earlier, and which feature the original lineup, are by no means bad, but they do not compare with the sheer power, verve and originality of the later tracks, and seem to exist as if merely to emphasise the incredible metamorphosis in the band’s sound. Suffice to say, the songs on the first side more than make up for it. The band’s promise may have been tragically unfulfilled, but the dreams they have woven will never fade. (JJ)

View all posts by tejopa