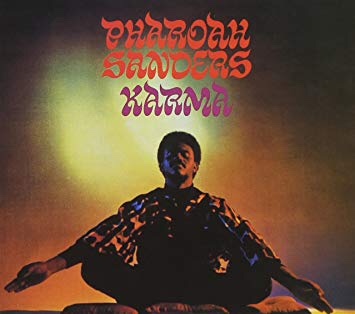 It begins with a jaw-dropping celebratory blast of sax that snowballs into a technicolour avalanche of horns and percussive instruments, filling out every inch of the sound until breaking point – a joyous burst of spiritual energy loud enough to raise the dead from their tombs. It then retreats into a restrained and breezy tonal blues (with more than a subtle nod to ‘A Love Supreme’) featuring tropical split reeds and bells which shuffle the rhythm along gently, while vocalist Leon Thomas first sings, then as if possessed by some supernatural force, yodels (!) his hymn of praise, until once again, the momentum catapults the song forward towards its brain-scrambling cacophonous heart, which is as dense and aggressive as anything on ‘Trane’s ‘Ascension’. And we’re not even half way in yet! Welcome to Pharaoh Sanders’ ‘The Creator Has A Master Plan’. The awe-inspiring 32 minute masterpiece is brim full of pregnant passages suddenly bursting ecstatically into feverish and tumultuous tenor saturnalia.

Farrell Sanders, a protege of Sun Ra – who gave him his lordly title – made a series of blinding free jazz albums on the Impulse! label in the late 1960s and early 1970s. Along with Albert Ayler, Archie Shepp, Alice Coltrane and others, this expressiveness became known as the ‘New Thing’. ‘Karma’ with TCHAMP taking up 90% of the playing time, is surely Sanders’ most perfectly realised moment. We hear his progression from the ‘Nubian Space Jazz’ of ‘Tauhid’ gilding his fresh canvass with brazenly psychedelic colours and textures.
In 1969 the hippie dream was over and heading for the horror of Altamont. The kids were faced with an extended conflict in Vietnam, and in pondering these existential crises crept back into their bedrooms where the excesses of ‘prog rock’ began to ferment ominously. Of course, once upon a time jazz and rock were very comfortable bedfellows; rarely today is that fusion apparent. ‘Astral Weeks’, ‘Happy Sad’ ‘Trout Mask Replica’,’The Soft Machine’; all of these effortlessly incorporated their jazz influences into the rock idiom. This unhappy divorce was exacerbated by the growth and development of electronic music, which has been far more accommodating of jazz influences and this has resulted in a seismic shift in the amount of serious exposure afforded by rock fans to jazz, and even to the classic Impulse! records of the late 1960s and early 1970s, many of which would once have been embedded as staple entries in any serious rock and soul LP collection. From the perspective of the rock fan, with only a passing interest in jazz, here is a good place to start. Somewhere on The Stooges debut album is a bass line lifted from Sanders’ ‘Upper and Lower Egypt’ and that influence would be worn more openly on Side 2 of Fun House with its free jazz given a blistering punk makeover borrowing heavily from Ayler, Coltrane, Sanders and ‘The New Thing’. (JJ)