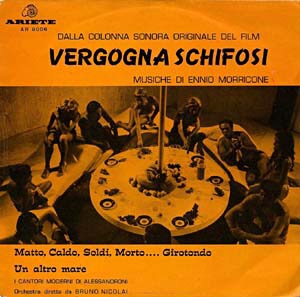 Vergogna Schifosi (Dirty Angels) is an obscure 1969 Italian thriller directed by Mauro Severino, purportedly a thinly veiled attack on bourgeois hypocrisy (I don’t know for I have never watched it),  given impetus by political events across Europe in ’68. It is probably fair to say that commercially it didn’t amount to much, and the film also has a poor critical standing. The few clips available on YouTube might arouse your interest – they did mine – but that’s likely to be because of the music you hear in the background.

The soundtrack to Vergogna Schifosi is 23 minutes long. The LP could set you back £25 or so, if you can find it (Light In The Attic reissued it a few years back). In fact, ten minutes worth is really a variation on the title theme, which makes three appearances including as a reprise. Hardly value for money you might think. Well, think again. Entitled ‘Matto, Caldo, Soldi, Morto & Girotondo’, it is very possibly the most beautifully bewitching suite of music I have ever heard in my life. A simplistic nursery rhyme melody with some faintly erotic girly cooing at the beginning – or perhaps that’s just the seductive Italian accents –  gathers inexorable momentum as a swirling spiral of strings, celeste and harpsichord oscillate alongside some choral accompaniment by the I Cantori Moderni di Alessandroni ensuring it’s ecstatic ascent continues via a spectacularly beautiful OTT performance from renowned Italian singer Edda dell’Orso (a veteran of several Morricone film projects including Once Upon A Time In The West) taking us all the way up to Dante’s angelic ninth sphere of Paradiso. Upon its arrival there we have the soundtrack’s second theme ‘Un Altro Mare’, which plays out like a blissfully harmonious marriage between Krzysztof Komeda and Burt Bacharach. These two pieces are so ravishing, so utterly beguiling, I feel guilty for listening to them – as if I have uncovered some unspoken secret fron the world to come. Each time I give ear to it, I am convinced my life expectancy will diminish a fraction further, as if some cruel variation on the law of Karma is invisibly balancing out my euphoria. Perhaps I have heard too much, seen the unseen, tasted forbidden fruit?  But I continue go back, slavishly, for more. In fact the music here – with the exception of a badly dated (and best overlooked) three minute sub-Beatles pastiche near the beginning –  is virtually impossible to dislodge from one’s head. I wonder how I have managed to live without it for so long.

I am no authority on Il Maestro – I have the odd compilation lying around, but that’s about it. I know very little about him, but have often been tempted by those garish late ’60s soundtrack sleeves. Nevertheless, I have baulked at the thought of purchasing them before now, imagining the films to be of highly dubious quality and the music too expensive a gamble. But if you, like us at TNPC, are a fan of Stereolab and High Llamas, you will recognise instantly an essential ingredient of their sound. I should have taken Sean O’Hagan’s advice years ago when he spoke so enthusiastically of its magic. Morricone’s output during this period was prolific so I expect my late conversion to cost me a small fortune. But this one without doubt is a must have. (JJ)