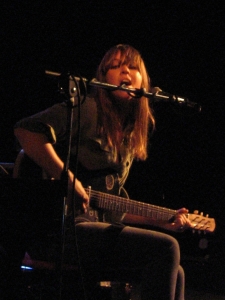 On an airless afternoon during the height of a clammy Glasgow summer, I first heard her voice. A sluggish drawl, as though vainly battling sleep. In 1999, everyone in Missing Records was listening to Cat Power’s ‘Moon Pix’. I left Missing that summer and forgot all about Chan Marshall and that voice, returning faithfully to my tired LP collection with its familiar sleeves, smells and sounds – like putting on a pair of tattered, but very comfortable old slippers. Only gradually did I rediscover my zest for newer sounds. Four years later, a recommendation from an old colleague during a brief rendezvous in Glasgow’s finest music emporium, Monorail, led me to a (re)discovery. And to one of the very best albums of the new millennium thus far.

In 2003, Chan Marshall was in trouble. One can sense a sombre desolation and sadness on her 5th LP ‘You Are Free’. In her interviews at the time, Chan spoke of her exhaustion with touring and travelling, the conspicuous lack of routine/stability in her life, the meddlesome politics of record companies and the irksome complexities of the nature of studio recording. In the haphazardness of her day to day existence, she perceived the need for a kind of liberation of the soul. They were not the best of times. Live performances were edgy, dysfunctional, often chaotic. She was drinking more, perhaps abusing other drugs. Her latest relationship was nearing its end. A mournful atmosphere pervades the recording, a sense of physical and spiritual dislocation. Some say an artist in emotional turmoil is primed to produce their most soulful art, and in this case, that maxim sings true.

The fourteen songs on ‘You Are Free’ were culled from around forty or so, which Chan had written during a frenetic year of travelling and touring, and were selected carefully for the album with the assistance of engineer Adam Kasper. The songs, at once deceptively simple, uncoil to reveal great depth. Anything superfluous is eschewed. There is no grand gesture, no unnecessary embellishment, no affectation. There is barely a chorus to be heard, and the tempo rarely changes, yet the subtle minimalism of the arrangements provides real depth to the songs.

The opener, ‘I Don’t Blame You’, conversely the last song written for the album, is one of four brilliant piano-led tracks, and contains a reservoir of empathy for the song’s subject. Marshall only very reluctantly revealed the protagonist to be Kurt Cobain, but in truth, that was merely confirming what everyone had long suspected. [‘Last time I saw you/You were on stage/Your hair was wild/Your eyes were bright/And you were in a rage/You were swinging your guitar around/Cuz they wanted to hear that sound/But you didn’t want to play/And I don’t blame you’] Here, the song’s strength lies in its avoidance of any stylistic homage. Rather, Chan’s voice, all raggedy velvet, sounds wise with lifetimes, and over a stark block piano riff she conveys the familiar story with great subtlety in a fitting tribute which reveals a deeper sentiment at the heart of one of the album’s key themes.

The lyrics to ‘Free’ and the album’s title itself could be construed as a rallying call to the listener: [‘Don’t be in love with the autograph/Just be in love when you scream that song’]. The message could be ‘break those fetters’; ‘be who you want to be’, but one suspects it is there to serve as a reminder to the author that she alone holds the power to regain control of her own life?

Amongst the other piano led tracks is ‘Names’, a despairingly tragic account of the abused lives of five of Chan’s childhood acquaintances, and the mysterious closer ‘Evolution’, featuring guest vocal by Eddie Vedder, where a hauntingly cryptic reverie drifts out gorgeously to the album’s close.

At times, there is an Antipodean countryish feel to the album, mirroring the muddied rootsiness of The Triffids circa’ In the Pines’ / ‘Born Sandy Devotional’ or the crawling black death of ‘From Her To Eternity’ era Nick Cave. This is hardly surprising; the aforementioned ‘Moon Pix’ had been recorded in Melbourne with The Dirty Three, and on this outing, Warren Ellis (Bad Seeds) is among the guest musicians. Ellis has a starring role on one of the album’s real highlights ‘Good Woman’, where he manages to conjure an authentically Appalachian violin sound, making this, despite its traditional C&W lyrical content (they could have been written for Tammy Wynette) less Nashville and more Kentucky fried. The childlike backing vocals (credited to ‘Maggie & Emma’) add an eerie quality and the whole arrangement works sublimely.

Elsewhere, over a basic acoustic strum David Campbell’s exquisite string arrangement on ‘Werewolf’ including superb cello accompaniment, lends it a gravitas befitting something from Nico’s’ Chelsea Girl’ or ‘The Clarke Sisters’ by The Go Betweens, and acts as a musical bridge between the sparser solo songs and the more conventional band outings. Starker still is the desperately bleak ‘Baby Doll’, which may be an intimate portrayal of a self-destructive friend, or a confessional autobiographical snapshot?  [‘Baby/Black, black, black is all you see/Don’t you want to be free?/Baby/Red, red fire is what you breathe/Don’t you want to be clean/Honey, the shape you’re in /Is worth every dime you spent/Baby Doll/Turn out the lights/Set yourself on fire/Say good night’] Whatever the case, those little noises scraping along in the background certainly add to the discomfort. And on ‘Keep On Running’, Marshall’s take on ‘John Lee Hooker’s Crawling Black Spider’ there is even less room to breathe freely.

‘Shaking Paper’s little rippling rivulets of feedback groan along queasily, while ‘Speak For Me’ and the single, ‘He War’, are the most conventional rock tracks (drums courtesy Dave Grohl) – both appear to concern Chan’s unravelling relationship. On ‘He War’ she laments [‘I never meant to be the needle that broke your back/You were here, you were here, and you were here/Don’t Look Back’] with an impassioned vocal performance which is palpably soulful and technically dexterous, alongside an infectiously catchy ‘Hey hey hey’ chorus. Marshall was reportedly unhappy with the version recorded for the album, claiming it lacked the raw-ness of the original ‘live band’ recordings.

What it does not lack is soul, and that can be said for everything else on ‘You Are Free’. If I feel uncomfortable labelling American country music ‘white soul music’ (the worst country is often something else altogether) I do so merely to illustrate a point – which is that soul / soulfulness is not confined to any particular musical genre. Chan was already a soul artist long before ‘The Greatest’, most amply illustrated here on ‘You Are Free’. On ‘The Greatest’, she embarked on a soul project that was at times more style than substance. While it is a good album, there was really no need, for Chan’s soul credentials were already well established. ‘You Are Free’ was truly a soul album, it’s rawness and honesty straight from the heart, and conclusive proof that at times, less can certainly mean a whole lot more. (JJ)